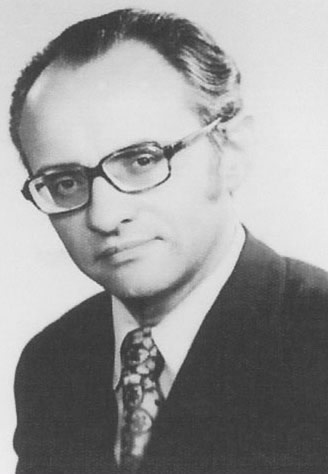 EMIL NADJAKOV (1929-1996) was the first leader of the nuclear reactions group at INRNE, academician of the Bulgarian Academy of Sciences, physicist - theorist and experimentalist, doctor of sciences (1979), professor at the Department of Physics of the University of Sofia (1980).

Emil Nadjakov obtained his first experience in nuclear physics during his two-year stay at the University of Goteborg, Sweden. His international relationships developed very quickly. They were expressed in a large number of visits in many worldwide known centers for nuclear research in Europe and participation in different International conferences (Europe, Canada, USA). In addition, he worked for many years as an expert of the IAEA for Bulgaria.

Academician Emil Nadjakov was an exceptional combination of highly-qualified theorist and experimentalist. His name in both nuclear research areas was well-known and frequently referred to. His basic scientific contributions are published in more than 150 papers, predominantly in distinguished nuclear physics journals. Briefly, the directions of his physics research were the following:

The main content of the second field was the investigation of high-spin states. The study of nuclear reaction mechanisms, in particular those related to the yrast line feeding, was also an essential part of his experimental interests. In the last decade of his life, the experimental efforts of E. Nadjakov moved to the application of laser spectroscopy for nuclear structure study (nuclear moments, deformations, changes in the mean square charge radii).

Professor Nadjakov was an outstanding lecturer, whose lectures attracted great interest of many generations of students during his nearly 40 years activity as university teacher. He created two excellent physics courses at the Faculty of Physics of the University: "Physics of electrical and optical phenomena" (general physics) and "Physics of atomic nuclei and elementary particles" (theory). Both of them are still actually taught as at the moment of their creation.